LISD Reflects on the Legacy of Frank Dick 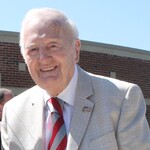 Longtime community leader and philanthropist, Frank Dick, passed away on September 5, 2022. The Lenawee Intermediate School District is reflecting on Mr. Dick's many years of dedication to public education, particularly his leadership through the Lenawee County Education Foundation, where he continued to serve as Chairman until his passing.

Dick was a veteran of World War II, receiving numerous medals and accolades, including the Purple Heart and the Bronze Star. After the war, Dick and his wife, Shirley, lived in northern Ohio and southeastern Michigan. Dick served as Superintendent of Schools in Sylvania and Toledo and later became President of Gleaner Life Insurance Society.

Dick played an instrumental role in the creation and success of the Lenawee County Education Foundation (LCEF) dating back to the mid 1980s. Since its inception, the LCEF has awarded more than $6.5 million in approximately 6,000 scholarships to Lenawee County schools, many of which were funded by Dick and his late wife, Shirley. Dick was a passionate advocate for higher education opportunities for students, and took great joy in celebrating the scholarship recipients at an annual reception. Dick was able to record a video message earlier this year congratulating the 2022 recipients and sharing rules for success in college.

"Frank was a true pillar of Lenawee County," said Mark Haag, LISD Superintendent. "We join the community in mourning his passing, but also celebrating the incredible impact he has had on the lives of so many local students, educators, and organizations through his leadership and generosity. We will continue to honor Frank and Shirley's legacy in our work."

The LISD TECH Center held its second annual Certified Nurse Assistant (CNA) pinning ceremony for students in both the Nursing Preparation and the Certified Nurse Aide programs on Tuesday, December 13, 2022. 26 LISD TECH Center students were pinned as part of the ceremony, having met state requirements to earn a CNA certification. One additional student met CNA requirements but was unable to attend.

On Monday, December 19, it was determined to close several classrooms at the LISD Milton C. Porter Education Center based on illnesses, including positive COVID-19 tests, impacting both staff and students. This decision was reached out of an abundance of caution to proactively prevent further spread or exposure to more illness before the holiday break. All impacted staff and families were notified directly.

LISD TECH Center students celebrated Veterans Day earlier this month through a project designed to honor veterans in Lenawee County. Led by the Nursing Preparation program, students and staff from across LISD TECH Center programs and other LISD classrooms created cards, notes, and various gifts to 84 veterans to recognize their service.